Cannabis has been grown and cultivated for medical, industrial and recreational use throughout recorded history. The mechanism of action for cannabis remained a mystery until the discovery of phytocannabinoids or plant cannabinoids and the receptors known as the endocannabinoid system (ECS). Phytocannabinoids are terpeno-phenolic compounds that mimic the effect of endogenous cannabinoids formed in the human body and that interact with the ECS.

Why is CBGA also known as the mother molecule?

Phytocannabinoids are biosynthesized and secreted by glandular trichomes found on the flower tops of the cannabis plant. In fresh hemp, we tend to find acidic forms of phytocannabinoids. These acidic forms are precursors of the neutral forms, which means that the neutral forms derive from the acidic ones. This process is called oxidation and occurs naturally. In plants, cannabigerolic acid (CBGA) is produced first. This is also known as the “mother molecule” as all other phytocannabinoids are formed from it via enzymatic processes. 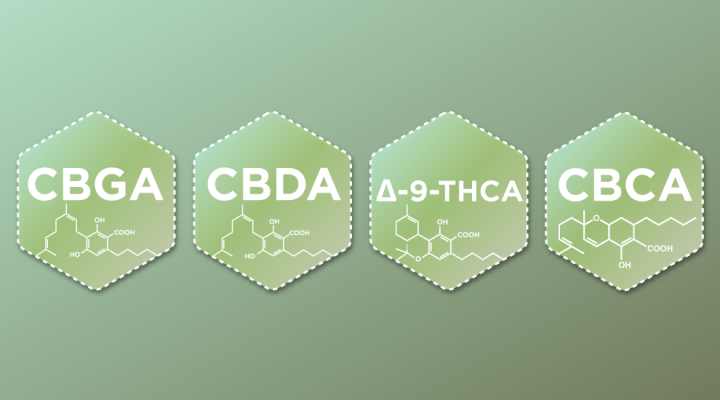 CBGA is the precursor of Δ-9-tetrahydrocannabinol (Δ-9-THCA), cannabidiolic acid (CBDA) and cannabichromenic acid (CBCA). Those then oxidize to Δ-9-tetrahydrocannabinol (Δ-9-THC), cannabidiol (CBD) and cannabichromene (CBC). However, not all CBGA is converted to other cannabinoids, which means cannabigerol (CBG) can also be found in the plants. Some cannabinoids are not biosynthesized in cannabis, but they formed as the degradation product of other cannabinoids. This process occurs naturally when cannabis or cannabis-derived products are exposed to heat and/or light, for example, during drying or heating. The best known such cannabinoids are cannabinol (CBN), cannabielsoin (CBE), cannabicyclol (CBL) and cannabicitran (CBT).

The two most abundant phytocannabinoids produced by the cannabis plants are Δ-9-THC and CBD, which are usually referred to as the main or major phytocannabinoids. Based on the physical characteristics of the plant, two main species of cannabis were originally described. However, due to the vast breeding programs, the strains are categorized according to the content of the cannabinoids Δ-9-THC and CBD. The Δ9-THC dominant strains with low CBD contents induce intoxicating, psychotropic effects including euphoria, enhanced sensory perception and memory impairment. In contrast, CBD dominant strains with low Δ-9-THC contents are non-psychotropic. The confirmed effects of CBD are anti-inflammatory, anti-oxidative, anti-emetic, anti-psychotic, anti-convulsant and pain-relieving. 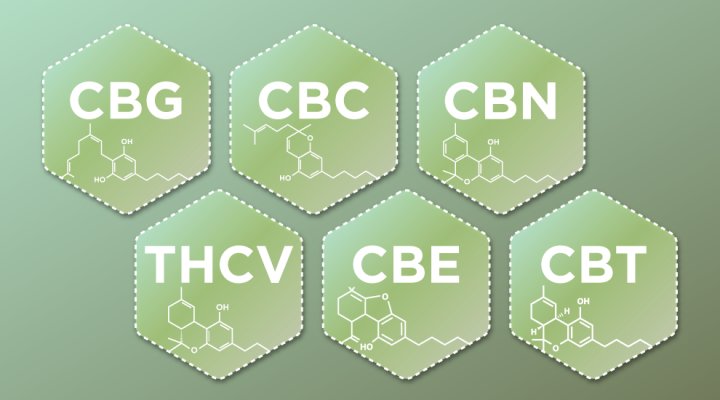 What about minor cannabinoids?

Beyond Δ-9-THC and CBD, cannabis produces more than 140 other phytocannabinoids that are referred to as minor and/or rare cannabinoids. Few of the minor cannabinoids have been specifically researched in humans, as they are significantly less abundant than the dominant cannabinoids. In most cases, they are less than 1 % of the total cannabinoid content. Despite what looks like trivial quantities, their influence as a part of the entourage effect should not be overlooked. The entourage effect refers to the combinations of cannabinoids, terpenes and other phytochemicals, complementing and enhancing each other’s action. Minor cannabinoids are thought to play a huge role in the synergistic force of the entourage effect, which has been shown to boost the beneficial effects of cannabis. The effect depends on the relative amounts of the individual compounds and is thus dependent on the chemical profile of the individual plant.

We use cookies on our website to give you the most relevant experience by remembering your preferences and repeat visits. By clicking “Accept All”, you consent to the use of ALL the cookies. However, you may visit "Cookie Settings" to provide a controlled consent.
Cookie SettingsAccept All
Manage consent